Submitting your vote...
Not rated yet. Be the first who rates this item!
Click the rating bar to rate this item.
Published on 13.05.09 14:19 Age: 13 yrs
Category: Stefany Conners' Naturist Diary

Page from the old Stephany Conner's website rediscovered by Archive.org. There was in 1999 a diagram of the group which sadly wasn't salvaged from the archives. 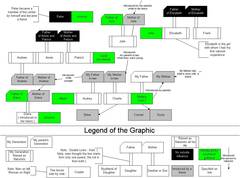 A lot of people have been asking questions about my group. Also, I have often been vague about who was who, creating confusion. I decided, on April 30th, after having heard the origin of Naturism in our group, to put a list of people belonging to my group of naturist, including a few stories. I also created a chart showing the relationships between the different members.

I will update it as time pass by, but for easier reference, I will put a  in front of new or modified entries since the first draft.

So, here is a list of the members of my naturist group of friends, with a short description :

( they are presented in reading order of the graph below, that is row by row from left to right and then top to bottom )

I hadn't given names to four members of the group : Audrey's boyfriend, Suzie's boyfriend, Peter's girlfriend and My boyfriend. They will now be named, in order, Albert, Conrad, Kristina and Charlie.

TAKE NOTE THAT ONLY MY NAME IS REAL : ALL OTHER NAMES ARE INVENTED TO PROTECT THE PRIVACY OF THE PEOPLE CONCERNED

Peter : He became a naturist while in the early teens. He never wanted to put clothes on at home and his parents were tired to always reminding him about that. One day, while he was watching the Television with his family, there was a news report about naturists. Peter's younger sister made fun of him, saying he was naturist. He replied by undressing and throwing his clothes at his sister saying that unlike her he was not ugly and didn't have to hide behind clothes. Desperate, his parents contacted the closest naturist center for information after having failed to correct him. It happened to be the naturist center of our group. They explained the situation to the owners, saying they didn't know what to do. The owners offered to let Peter visit for free for a day, to see if he liked that. His parents accepted and Peter became a friend of our group. He later introduced his girlfriend and they now live together. Peter no longer spend all summer at the center since he as to work, but he still hangs with us on Friday's and often comes during the week-ends. A little older than the rest, he now as a full-time job.

Kristina, Peter's Girlfriend : They have been dating for four years now. During the first two, she didn't hear about naturism since he was too busy at school and work to bother with it. When she learned about it, she refused to become a naturist and to let him be one. Last summer however, she started to change her mind, and now is a full naturist.

Julie : She was never mentioned before in the diary specifically. A good friends of ours, she was raised as a naturist by her parents. Her mother became a naturist in her teens after having been introduced by her parents. She introduced my in-laws to naturism, and when she got married, also converted her husband.

John : John is Elizabeth's boyfriend. She introduced him to naturism about a year ago, when they started dating.

Elizabeth : The first time I decided to try naturism, I was waiting naked for my boyfriend to arrive for dinner. That day, he arrived with Elizabeth, to my big surprise. It partly thanks to her that I am a naturist since she reassured me soon. She was raised as a naturist by her parents who had tried naturism while in vacation in Europe during their honeymoon. They were amongst the first members of the our Naturist Center, so Elizabeth was raised within our group.

Frank : He is Elizabeth's younger brother. He also hangs with us for naturist activities, but most of his friends are not naturists. Frank put naturism aside while in his pre-teens, but he started recently to get more involved. He had an anti-naturist girlfriend for a few years who refused to see his family because she thought they were perverts. One day, Frank was swimming naked in his backyard and his girlfriend, after having surprised him, left him for good. After an initial rejection of naturism, he slowly came back.

Andrew : His parents were introduced by my in-laws after a clothing-optional party. Most of the people naked at that party never became naturists, but Andrew parent's did and raised him as such.

Annie : Her parents became members of the center after having frequented several clothing-optional beaches. Annie practically grow up with Andrew. They were high school sweet hearts. I heard a funny note about them. Their high school learned they were naturists when they arrived at a Halloween party at one of their friends house dressed up as Adam and Eve ( they had glued fig leaves on ! ). Everyone was initially laughing, because they didn't know they were naturists, but at the end of the party, the fig leaves were off, and so did the clothes of several other people in the house ! Some are still friends of them and undress when they visit, but most never repeated the experience.

Patrick : Annie's brother, he is more famous in my diary for being Lucie's boyfriend. He was raised at the center like his older sister.

Lucie : My best friend. She is mentionned at several places in my diary and even has a page. I tried to introduce her to naturism, but it is Patrick, her boyfriend, which finished the job.

Johanne : She is Diana's girlfriend. Diana introduced her to naturism, and she loves it. Both will spend the summer at the center

Albert, Audrey's boyfriend : He was introduced only a few weeks ago to naturism, and is reacting well to it. Read past entries in my diary to know more.

Audrey : She is my boyfriend's younger sister. Like my boyfriend, she was raised as a naturist

Charlie, my boyfriend : Raised as a naturist by his parents. They were themselves introduced to naturism after an accident occurred with Julie's mother. They came to visit her and found her with her parents naked in the backyard. After talking, my in-laws took a chance at skinny-dipping and eventually became naturists.

Stefany ( Me ) : Well, if you wonder who I am, I guess you should read my diary... No, seriously, I was introduced to naturism by my boyfriend. I introduced Suzie and Lucie ( Though it's Patrick who finished the job ) to naturism. I also introduced my parents. Before having met my father, my mother had tried it once with a friend. ( you can read the story in my past entries )

Steve : A good friend of my boyfriend from high school, after having refused to try it for several years, he tried it after a long bicycle ride in a forest trail with my boyfriend and a few other members of the group( Peter, Andrew, Annie and Julie ). It was quite hot and since it was a public trail, nobody had undressed. When they arrived at a small lake, The naturists decided to undress and swim a little to cool off. Steve eventually join them, After the swim, Peter decided not to dress back up for the rest of the ride and to put his clothes in a pack-sack. Andrew and Annie immediately followed. Julie and Patrick first asked Steve if it was alright with him. He decided to remain undressed like the other and they finished the trail naked ( near the end they dressed back up since they were seeing more and more people ). He now is a true naturist.

Suzie : My friend. I introduced her to naturism. For all the details, you should read my diary.

In addition to these people, I should add :

Emilie,who is not a naturist. A good friend of mine, she now hangs with us even during our naturist activities, but she doesn't undress, being generally the only clothed person in our happenings.

There is also Julie's brother who is still a naturist but who is studying in a another province, so we don't see him much. During his first year there, he came back for summer, but he now as a girlfriend there, so he stays with her. He sometimes come to visit us, but I still haven't seen him. He met his girlfriend at a naturist center near his University, after having met her a few times in school. Neither of them knew the other was a naturist even thought they were getting quite close. They started dating at their naturist center.

Also, there is Diana's sister who's boyfriend is totally against naturism. He is very close minded and doesn't want her to met Diana too often, since he is afraid that homosexuality might be contagious. We don't hear much from her for the moment, and I met her only once, on a Friday evening, when she came visit her parents for a few minutes. Her boyfriend waited in his car outside during the whole visit.

I once saw Peter's sister when she dropped by at his apartment while we were visiting. She stayed about an hour and even undressed. She isn't a naturist, but she sometimes likes to have naturist activities. She now comes a week-end or two at the center, but Peter says it is mostly to get a free full-body tan.

Their is only George and Bianca, our owners who live upstairs. They don't have kids and are in their forties. George is a teacher at the University. I have no idea how they became naturist. Last summer, when my boyfriend was looking for an apartment while residing at the center, they offered him their basement, which had been used by Bianca's sister.

Amongst the people who participate in naturist activities without undressing, I should also count Suzie's sister. While Suzie had her problems, she moved in with my boyfriend and I. The three of us being naturists, it was normal to be naked at home. When Suzie's sister came to visit her, she didn't undress, but she also never asked us to redress.

I might as well add Eric and Susan. Eric is a teacher who works with Andrew's mother. Both are in their mid thirties. They have three kids, two boys ( 11 and 8 ) and a girl ( 10 ). The three of them are being raised as naturist, but only the 8-year old can really be qualified as "being a naturist all his life" since Eric and Susan became naturists only 4 years ago, when he was 4. I haven't met them, but they will spend the summer at the center.

<- Previous
Rate this story !
<- Back to: Stefany Conners' naturist diary

Other news from this category:

Rediscovered from archive.org, here is an Interview Stephany Conners had published with her friend Kristina. It was presented then as authentic, even if we now know it is pure fiction.

Rediscovered from archive.org, here is an Interview Stephany Conners had published with her friend Annie. It was presented then as authentic, even if we now know it is pure fiction.

Stefany Conners' diary entried for May 1999

May 1999 Entries for the naturist diary of Stefany Conners.

There are no comments yet on this article